A few days ago we decided to take advantage of the long holiday weekend and the good weather that the Basque Country has been delighting us in to take a trip into the woods. We decided to make an excursion to the Urkiola Natural Park (declared as such in 1989), a protected natural area located at the southeast corner of the provinces of Biscay and Alava in the north of the Basque Country. 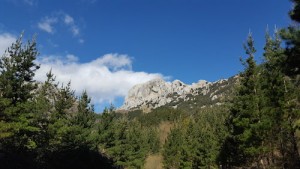 The landscape of the Urkiola Natural Park is composed of large masses of limestone, which create a stunning panorama of mountains with steep slopes and ravines. Through the years, the abundance of limestone and rainfall in the area has produced a rich karstic relief, with numerous caves. Today, the caves shelter the nests of vultures that roam the Natural Park. The park’s karstic plains also support a diverse and resilient natural landscape composed of shrubs, grass, and beech and pine forests.

Welcoming spring with a clear blue sky and the sun on our backs, we began our trek in the nearby village of Mañaria, a municipality located in the comarca of Durangaldea in Biscay. From the town square, we crossed a wooden bridge that goes over the Mañaria River and began our sloped ascent to Mount Mugarra. Standing tall at 969 meters (3,179 ft.), this mountain is one of the more imposing ones of Durangaldea, exhibiting a slender silhouette that can be seen between the limestone masses of the Aramotz Mountain Range from afar. 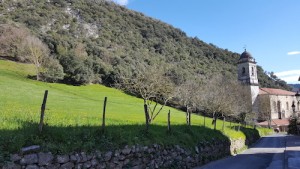 We ascended Mount Mugarra through two well-defined sections. In the first section, before reaching the district of Axpe in Mañaria, we trekked by road, with a constant slope and impressive views of the walls of Mugarra to our right. The curious karstic rock caves on the south wall of Mount Mugarra house the nests of the vultures of the park. 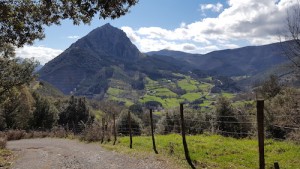 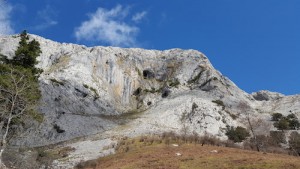 From here the ascent was pretty vertical and sometimes a little difficult, requiring an occasional rock climb here or there. After about 30 minutes of steep and steady climbing, we reached the top of Mugarra, where we got the opportunity to delight in panoramic views of Durangaldea and the Urkiola Natural Park. We also got to contemplate views of mythical summits of the Basque Country, such as Anboto, Txindoki, and Untzillatx, among others. 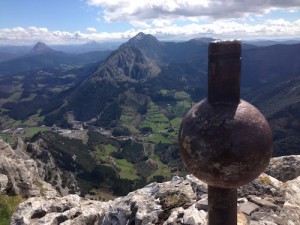 After a short picnic at the summit, we rested for a few minutes under the heat of the sunlight to then begin our descent and return to the mountain pass of Mugarrikolanda, where we continued our journey to our left towards Mount Leungana. With an elevation of 1,008 meters (3,3307 ft.), the Leungana is the highest summit of the Aramotz Mountain Range. 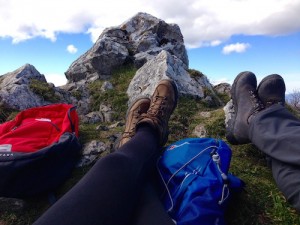 We began our ascent to Mount Leungana through a beautiful forest, trying to follow the yellow and white marks that define the path, which in principle are well marked (although we missed a few on the way and had to climb through solid and sharp rocks for a few minutes). However, once we crossed the path, the ascent to the summit was, although steep, clear and direct. We were lucky to have the summit of Mount Leungana to ourselves, where we contemplated the beautiful views of the Aramotz Mountain Range for a few minutes. We then began our descent back to the town of Mañaria. We crossed a large a pine forest on our way back, along a distance of about 5 kilometers (3.1 miles) long. Some sections of the forest had been cleared recently. The journey back was not difficult, just a bit monotonous at times, but we were also tired from the trek and wanted to get back to town and head to the bar. 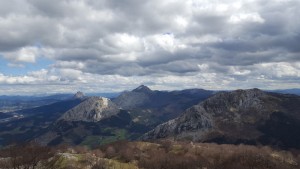 Having had a beautiful journey through the Aramotz Mountain Range and with the sun still shining, we arrived back to Mañaria where we took off our boots, got some comfortable shoes on, and had a cold beer before driving back to Donostia – San Sebastian. If you are the kind of person who enjoys the outdoors like us, don’t hesitate to take a look at our Active Tours section if you’d like to get a bit of an active introduction to the Basque Countryside with us. Or, if you’re looking for other kinds of active excursions or multi-day tours into the Pyrenees, contact us and let us know your interests!

5 Things To Do in San Sebastian on a Rainy Day
Scroll to top
Manage Cookie Consent
To provide the best experiences, we use technologies like cookies to store and/or access device information. Consenting to these technologies will allow us to process data such as browsing behavior or unique IDs on this site. Not consenting or withdrawing consent, may adversely affect certain features and functions.
Manage options Manage services Manage vendors Read more about these purposes
View preferences
{title} {title} {title}