This upcoming April 30th, the town of Burgui, a village in the Roncal Valley, will celebrate the Day of the Almadia. This festivity, held every year on around the same date, pays tribute to the “Almadieros” (Timber Rafters) who in the past transported timber wood for sale to other localities down the riverbed of the Ebro River. In Navarre’s Pyrenean valleys, the exploitation of woodland has been one of the region’s main sources of income and its rivers were used to transport the wood. To achieve this, the Almadieros would build a type of raft consisting of several logs of the same length held together by ropes made of willow: the almadias. As a result of improved communications and the construction of the Yesa Reservoir, the profession of Almadiero disappeared in 1952. 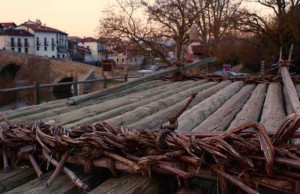 Thanks to the efforts led by The Cultural Association of Navarrese Timber Rafters and the involvement of the people of the town of Burgui, the Day of the Almadia was declared a Festival of National Tourist Interest in 2005. Today, the festivity of this locality in the Roncal Valley has been gaining popularity, and it is not only limited to the descent of the almadias down the Esca River but is also accompanied by a number of other complementary cultural activities such as craft fairs, rural sports exhibits, popular food bazaars, and traditional dances. 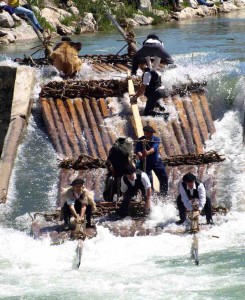 Additionally, we must not miss the opportunity to see the “Burgui, the Village of Trades” project with which the town is carrying out a process of recovery of its heritage through the reconstruction of different trades thanks to the voluntary and selfless work of its neighbors.

Finally, we should note that the descent of the almadias down river is not limited to just the Day of the Almadia, but the Almadieros also give the best of themselves on the eve before the festivity along the 4 kilometers that separate the Atadero of Olegia from the one in Basari. This descent is less known but arguably much more spectacular than the traditional section of the dam and the medieval bridge over the Esca River.

Trekking Mugarra & Leungana – Urkiola Natural Park
Scroll to top
Manage Cookie Consent
To provide the best experiences, we use technologies like cookies to store and/or access device information. Consenting to these technologies will allow us to process data such as browsing behavior or unique IDs on this site. Not consenting or withdrawing consent, may adversely affect certain features and functions.
Manage options Manage services Manage vendors Read more about these purposes
View preferences
{title} {title} {title}