In the town of Haro (11,330 inhabitants), at the foot of the Obarenes Mountains and the Cantabrian Mountain Range.

The origins of Haro’s Train Station District are rooted in the second half of the nineteenth century and came about as a consequence of the powdery mildew (1852-1862) and phylloxera (1863) plagues that devastated vineyards in France. French winemakers of the time decided to create wine warehouses near the train station of Haro to send the wine in bulk to Bordeaux using the Tudela – Bilbao line that was inaugurated in 1863. It is said that the first warehouse in the Barrio de la Estación that was related to wine was inaugurated in 1859 by the hands of the Sauvignon brothers, but it would not be until 1877 that the first wine-producing winery would be constituted there by the hand of a Frenchman from Pau and with the help of López de Heredia. 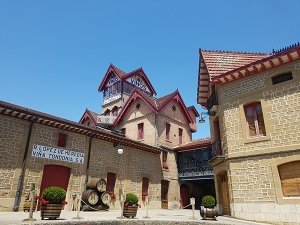 Once the place in which Haro’s train station was to be built was decided, the value of the land increased significantly and French people related to the world of wine acquired adjacent lands to build cellars and elaborate wine following French wine making methods that were very different from those used in the area at that time. They built buildings of French influence with thick walls (to protect them from inclement weather) and preserved the storage system of “calados” (underground rock tunnels) that was typical of the area. 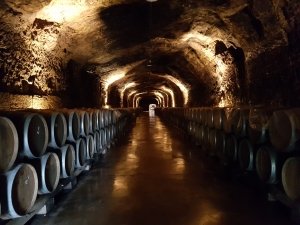 A calado in a Rioja Winery

The grapes were cultivated by Spanish winegrowers and the wine produced by the French winemakers who sent it in bulk to Bordeaux, France. It should be noted that the period of greatest boom in the transport of wine between the two localities was from 1877 to 1892, a period during which Spanish wines enjoyed customs exemptions that had been put in place by a Franco-Spanish agreement.

After this “golden era”, businessmen from Biscay (Basque capital) began elaborating wines taking advantage of the existing facilities and the know-how left by the French winemakers. They called their wines “Rioja Medoc”, “Rioja Sauternes” and “Rioja Borgona”, until in 1899 the phylloxera plague broke out in La Rioja. 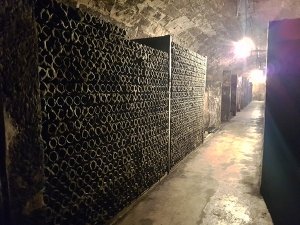 The seven wineries are located in the area of Rioja called Rioja Alta. The soils in this area are made of sandstone and limestone, and the climate is a combination of continental (coming from the plateau), Atlantic (due to the winds from the north), and Mediterranean (coming from the southeast through the Ebro river).

A visit to Rioja wine region is incomplete without a visit to Haro’s Train Station District and a tasting of the wines of any of the seven wineries located there. If you would like to discover the Golden Mile of Rioja, join us on a wine tour in the Rioja region.

5 Reasons Why You Should Do a Market Tour in San Sebastian
Scroll to top
Manage Cookie Consent
To provide the best experiences, we use technologies like cookies to store and/or access device information. Consenting to these technologies will allow us to process data such as browsing behavior or unique IDs on this site. Not consenting or withdrawing consent, may adversely affect certain features and functions.
Manage options Manage services Manage vendors Read more about these purposes
View preferences
{title} {title} {title}